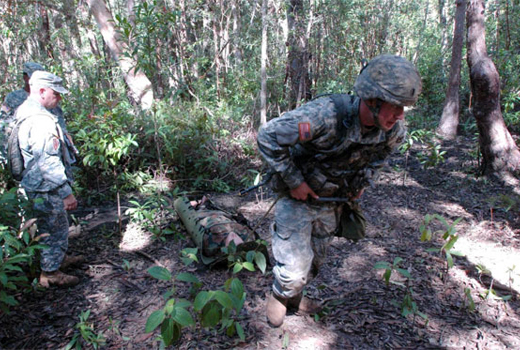 Throughout our nation’s history, many thousands of military troops have trained for peace and war, often with live munitions. Today, many of those training properties are no longer owned or controlled by the military, and live munitions still may be present. While the majority of these properties are now privately owned, a significant number have transformed into state parks, National Forests or wildlife refuges – all areas Boy Scouts, or other children, are likely to use for outdoor activities.

Everyone knows that the Boys Scouts motto is “Be prepared.” And while it might not surprise anyone that among the various skills a Scout might carry in his backpack include tying knots, first aid and hiking, the U.S. Army Corps of Engineers (USACE) is working hard to add an equally important skill set: the 3 Rs of explosives safety – Recognize, Retreat, Report. 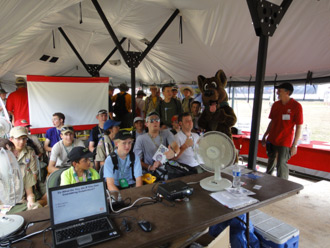 The U.S. Army Corps of Engineers participated in the 2010 National Scout Jamboree for 10 days in late July and early August at Fort A.P. Hill, some 60 miles south of Washington, D.C. The goal was to teach the Scouts to “be prepared” in case they encounter munitions along their hikes or camping trips in one of our Nation’s many parks or training grounds. Attended by nearly 45,000 Scouts and 270,000 visitors during the celebration of the Boy Scouts of America’s 100th anniversary, the Jamboree served as an opportunity for the Department of Defense (DoD), the USACE and volunteers from the office of the Deputy Assistant Secretary of the Army (Environment, Safety and Occupational Health), the 55th Explosives Ordnance Detachment (EOD) and the U.S. Army Material Command’s Research Development and Engineering Command, to teach as many Scouts and Scout leaders as possible about the 3 Rs of explosives safety.

Although the Jamboree was a place for fun and jubilation, the Corps of Engineers’ mission had a much more serious undertone. Aside from state parks, National Forests, or wildlife refuges, Scouts sometimes use currently active military installations for their outdoor activities. While installations make every effort to ensure such ancillary property use will be conducted in safe areas, the possibilities still exist that one could encounter an errant munition.

To address these dangers, the U.S. Army Corps of Engineers manages the Formerly Used Defense Sites (FUDS) program. Generally speaking, the FUDS program mission has three primary objectives: identify former military properties, investigate to determine whether prior military use resulted in contamination that may still pose a public risk and, if so, take appropriate risk mitigation measures, to include those from munitions. That’s where the Corps comes in. Within the FUDS program nationwide, more than 1,400 places exist where munitions may be present. The quantity and the technological challenges associated with locating such munitions make addressing these sites a daunting task. 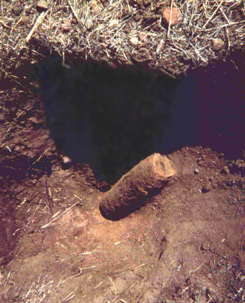 When considering the spectrum of environmental contaminants, munitions exhibit a truly unique characteristic – some type of human interaction is necessary before a munition can harm a person. This characteristic makes education a powerful tool in dealing with the hazard. In theory, if every property user were educated about explosives safety and altered his or her behavior accordingly, the hazard associated with old munitions would virtually disappear. Although that is obviously an unrealistic goal, education nevertheless can be one of the most cost effective methods for preventing tragedies at these sites.

And although, at the National Scout Jamboree, the focus was on educating Boy Scouts about the dangers of unexploded ordnance at Formerly Used Defense Sites, the 3 R message is equally important for all children and adults, as well as contractors and land developers. Accordingly, tools exist to make it easier for people to find out more about Formerly Used Defense Sites, as well as the possible locations that may contain munitions. The Corps of Engineers has established an interactive FUDS Geographic Information System website at: https://rsgis.crrel.usace.army.mil/publicfuds/. The website contains information such as property location, latitude and longitude coordinates, and which Corps district to contact for additional facts about the FUDS properties where the Corps is either currently working or expecting to begin work to address DoD-related contamination. This resource tool contains more than just the potential munitions sites, it also includes all FUDS properties for which the Corps has projected potential site clean-up costs. 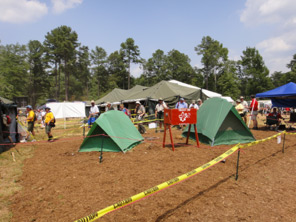 But at the Jamboree, the emphasis was on educating Boy Scouts – young men who possess the precise demographics of those most exposed to discarded munitions risks. As a group, Scouts are more susceptible because of their age, gender and natural curiosity. Several years ago, the Corps of Engineers conducted a documented incidents study involving munitions at FUDS properties. In the vast majority of cases, the victims were male. Somewhat less obvious was the fact that most accidents were caused by smaller munitions, which pose a greater public danger because they are more readily handled and carried. That led to perhaps the most important finding of the Corps’ incident study. Although in some cases precise details are missing, virtually all munitions-related accidents were caused by a person handling the item.

Boys infused with a curiosity of the outdoors and a sense of adventure gravitate to the Boy Scouts, and scouting cultivates those characteristics to help build skills and character. But sometimes those attributes can lead to potentially dangerous situations, and an old munition, not something encountered on a regular basis, can be especially enticing. Thus, it’s easy to see why the Corps and its partners knew it had to take advantage of the National Jamboree’s powerful opportunity to bring the 3 R explosive safety message to the Scouts.

The Corps of Engineers faced several challenges in trying to figure out how best to convey its message. Scores of exhibitors attend the Jamboree, all vying for the Scouts’ attention. Most find that eye-popping technologies and elaborate exhibits pay the biggest dividends in drawing Scouts and grabbing their attention. While 3 R messaging was not conducive to a flashy, high-tech display, Soldiers from Fort Belvoir, Va.’s explosives ordnance detachment connected with Scouts via a robot used to detect potentially explosive items. 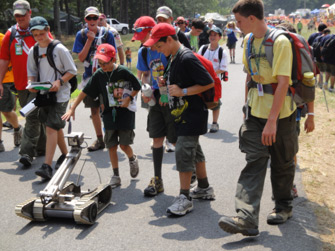 The robot was a huge hit with the Scouts. The EOD Soldiers would periodically drive it through the crowds – a silicon-chipped Pied Piper leading a trail of young men back to the exhibit. At one point, the robot was several hundred feet from the exhibit with a Scout teasing it with a $5 bill. The robot snatched the bill away with its claw, pivoted and made haste back to the exhibit tent, holding the $5 bill aloft with Scouts chasing after it. Once back at the tent, the robot relinquished its hold, the “victim” got his money back and another group of Boy Scouts was suddenly interested in finding out about explosives safety.

Once inside the Corps of Engineers’ tent, the young men received their initial 3 Rs briefing on how they could stay safe. They then headed outside to a mock campsite – a fictitious World War II infantry maneuver training area named Copperhead Point Campground. The campground name drew attention to the rough analogy between snakes and munitions. Scouts are regularly taught that poisonous snakes are present in most places in the country, but if you leave them alone, they’ll leave you alone. The lesson for snakes closely parallels the explosives safety message, and the hope was that this comparison would prime them for the 3 R safety message. 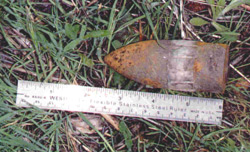 To further instill the safety message, fake munitions were hidden about the campsite and the Scouts were asked to locate and to keep track of how many there were – the “Recognize” portion of the activity. The Scouts were not allowed to pick up or to touch any items but were instead required to employ the last two 2 Rs – “Retreating” to a second tent to “Report” what they had seen. Afterward, they saw other displays, watched unexploded ordnance safety videos and viewed a U.S. map showing the numbers and locations of FUDS properties in each state with munitions potential.

Although the exhibit and activity were not pulsating with music and high-tech equipment, a remarkable event occurred. The slow trickle of Scouts, leaders and visitors to the exhibit area at week’s beginning rapidly multiplied as the Jamboree kicked into high gear. By the time everyone headed home, almost 15,000 Scouts, leaders and visitors had visited the Corps of Engineers’ exhibit area. Despite one of the hottest Julys on record, the young men were attentive and animated, asking questions and lining up for their chance to check out the exhibit and activity. 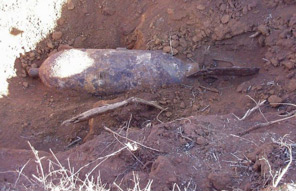 The Scouts and adults were appreciative of the educational opportunity. One young man noted that he would have picked up a munition before the 3 R training. Now he knows a safer way, which may, some day, save his life. Another appreciative participant, a Scout father, called the exhibit “powerful.” He commented that his son originally thought they would be learning “how to blow things up.” Instead, he learned how to stay safe.

It is not possible to know with certainty what impact an education effort such as the 3 Rs message at the National Scout Jamboree can have, but the fact that so many Scouts and adults took time to learn the importance of Recognize, Retreat and Report makes it likely that the effort will pay future dividends.