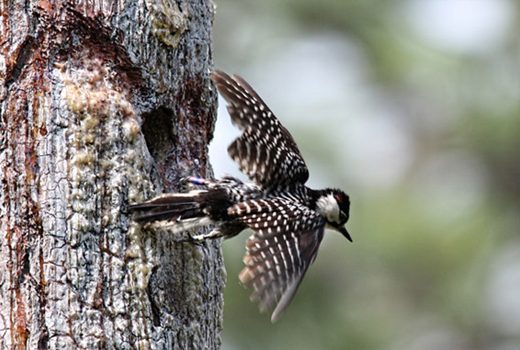 In 2011, North Carolina’s Marine Corps Base Camp Lejeune, the largest Marine Corps Base on the East Coast with approximately 40,000 Marines, achieved a significant milestone in the recovery of the red-cockaded woodpecker (RCW). For the first time in its history, the base’s population of this federally endangered species has reached 100 active clusters. A cluster is defined as an aggregation of cavity trees currently or previously used and defended by a group of red-cockaded woodpeckers. An active cluster contains at least one active cavity tree, which means at least one RCW is using the cluster. Reaching this milestone highlights a significant increase in Camp Lejeune’s population of the red-cockaded woodpecker throughout the last 25 years, and it is a potent symbol of the U.S. Marine Corps’ (USMC) commitment to endangered species recovery. But, perhaps most important to the Marines, reaching 100 active clusters will result in significant improvements in mission readiness opportunities by freeing up approximately 235 acres of the base to increased training.

This milestone was achieved through successful collaboration of a multidisciplinary team. The work of federal and academic biologists, wildlife technicians, regulatory agencies, base trainers and the cooperation of Marines in the field all contributed to what has been one of the fastest growing red-cockaded woodpecker populations throughout the last 25 years.

The United States Marine Corps has never been known to shy away from a challenge. But when the red-cockaded woodpecker was listed as endangered in 1970, the challenge of effectively training Marines on Camp Lejeune while helping recover the species seemed almost insurmountable. Camp Lejeune lies within the range of the red-cockaded woodpecker, a species which once thrived in the old-growth, fire-maintained longleaf pine forests that historically covered 90 million acres of the coastal plain from Virginia to Texas. By 1941, when Camp Lejeune was established, most of the longleaf pine forest had been cut. Today, about 3 percent of that original forest remains, and decline of the red-cockaded woodpecker has closely followed the demise of the longleaf pine forest. 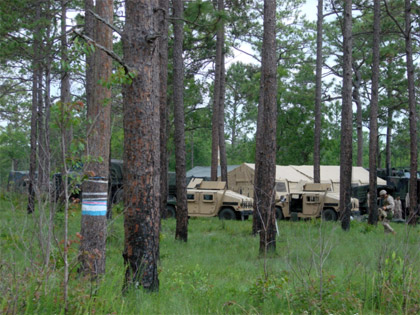 Photo by Danny Marshburn | Marines training in an un-buffered red-cockaded woodpecker cluster. The cavity trees are identified with blue and white paint.

As luck would have it, many of the land management techniques that made Camp Lejeune good for military training, as well as unintentional fires caused by training, also made the base good habitat for the red-cockaded woodpecker. As much of the commercial timber industry in the Southeast was moving toward short-rotation loblolly pine plantations, Camp Lejeune’s forestry program was letting trees grow older and emphasizing natural regeneration to create and maintain an environment more conducive to training.

With the passing of the Endangered Species Act in 1973, “take” of federally threatened or endangered species (to harass, harm, pursue, hunt, shoot, wound, kill, trap, capture or collect, or attempt to engage in such conduct) was prohibited without a permit. In addition, federal agencies, including U.S. military installations, are required to ensure their actions do not jeopardize continued existence of listed species and must implement programs to help recover these species. All these factors combined to create a perfect storm – a little woodpecker was seemingly going to threaten one of the Marine Corps’ premier training bases. In the early years of the Endangered Species Act, it looked like the Marines and red-cockaded woodpecker could not coexist.

In order to figure out how to help recover the species, base biologists had to learn as much as possible about their birds. So in 1986, Camp Lejeune initiated an intensive management and monitoring program for the red-cockaded woodpecker under the guidance of Jeff Walters, Ph.D., who was then a professor at North Carolina State University (now at Virginia Polytechnic Institute and State University). At the time, Camp Lejeune had 32 active RCW clusters. Research by people like Walters and others throughout the Southeast has led to a wealth of information on the bird’s habitat requirements and breeding system.

Based on this research, it became apparent that perhaps military training and recovering the woodpecker were not mutually exclusive. It turns out that mature, fire-maintained pine forests, with little or no hardwood midstory and grassy understory that the woodpecker prefers, also makes good training habitat. Over time it became clear that as long as the habitat was there, the birds could tolerate a certain amount of disturbance and still successfully nest and grow their population. Camp Lejeune discovered that by restricting certain training around the nest and cavity trees and managing the habitat, population stabilization and growth could be achieved. Early on, the standard at Camp Lejeune for protection of red-cockaded woodpecker clusters was a white-painted buffer 200 feet out from the cavity trees within which training was highly restricted.

The U.S. Fish and Wildlife Service’s 2003 revision of the Red-cockaded Woodpecker Recovery Plan established recovery units across the Southeast. 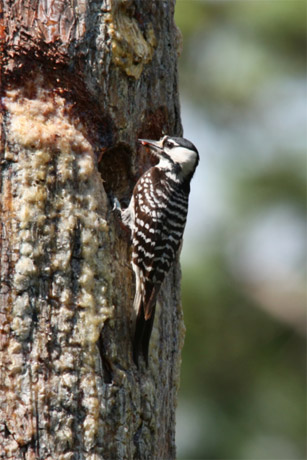 As Camp Lejeune began having success in growing its red-cockaded woodpecker population, it became clear that 173 active clusters and their associated 200 foot buffers would significantly impact training. So in 1999 the base initiated a study, led by Walters, to look at the effects of removing buffers on selected clusters. What Walters found was that removing buffers, and therefore allowing training within clusters, did not significantly impact nesting success of the unmarked clusters.

Based on this research, Camp Lejeune approached the revision of its woodpecker management plan in 2006 with the idea of allowing some unmarked clusters on the landscape. Working with USFWS, base biologists and trainers developed a plan, which included population milestones and incentives. The idea was that as Camp Lejeune reached certain population milestones, the base would be allowed to remove the painted buffers from a certain percentage of clusters. The milestones are in 25-cluster increments. And, as each milestone is reached, the percentage of unmarked clusters can increase by 10 percent. In addition to this system, Camp Lejeune identified high-use training areas within which all new clusters would be unmarked. With this plan, Camp Lejeune and USFW removed what was a dis-incentive (i.e. more restrictions) to grow the population in certain areas and created a system to reward good management with removal of training restrictions.

Upon reaching 100 active clusters, Camp Lejeune can remove protective buffers from an additional 12 clusters. Upon removal of these 12 buffers, one-half of Camp Lejeune’s RCW clusters will become “unmarked” and no longer subject to restrictions associated with marked clusters. Although the clusters have not been chosen yet, the average restricted area for a marked cluster is about 19.5 acres. So, upon removal of 12 buffers, Camp Lejeune Marines will gain greater training access to approximately 235 acres. Although this system does not solve all potential conflicts with red-cockaded woodpeckers and training, it clearly has benefits for both the bird and Marines training in-field.

Reaching this milestone is a significant achievement for Camp Lejeune in itself, but it also highlights the success the installation has had in growing its red-cockaded woodpecker population throughout the last 25 years. Since 1986, a combination of habitat improvement and restoration, cavity tree and cluster protection, and population management have greatly improved the health and size of Camp Lejeune’s RCW population. These efforts have resulted in one of the fastest growing RCW populations in existence, which has increased by more than 200 percent in 25 years. In 2011 alone, Camp Lejeune’s population grew by almost 9 percent.

Camp Lejeune’s success in growing its red-cockaded woodpecker population could not have been achieved without the successful collaboration of a team of people, including the base Environmental Conservation Branch (the Threatened and Endangered Species Section, the Forest Management Section and the Forest Protection Section), as well as Camp Lejeune S-3 (Operations and Training), contractors from the Virginia Polytechnic Institute and State University (Virginia Tech) and the Raleigh Field Office of the U.S. Fish and Wildlife Service. Camp Lejeune continues to have one of the fastest growing RCW populations in existence. Reaching the 100-cluster milestone is a testament to the work this team has accomplished.

This is a significant milestone because it demonstrates Camp Lejeune’s continued commitment to environmental stewardship and will result in greater training opportunities for Camp Lejeune Marines. 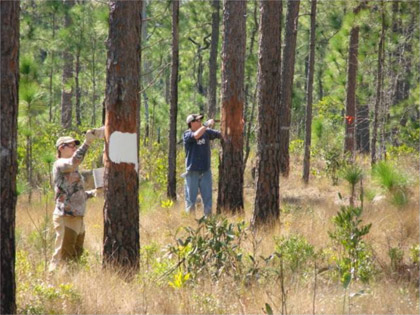 However, more challenges will exist in the future. With new weapons systems and future conflicts, and their subsequent demands on USMC lands, the Marine Corps will have to adapt to continue to find ways to train Marines and to recover the red-cockaded woodpecker. But, based on Camp Lejeune’s track record, there is every reason to believe future challenges will be met and overcome as well.

For more information, contact John Townson, director of environmental management at Camp Lejeune, by phone at 910-451-5003 or by email at john.townson@usmc.mil.